Going to Unwound shows was a once-a-year given/religious experience for me between the years 1994 and 1998. I saw the band every single time it came within 600 miles of wherever I was. Sometimes multiple times. To say that I was a fan is a gross understatement. Back then bands released records every year and then toured relentlessly. The lag now averages about two to three years between releases for most stable bands, which just seems ridiculous, especially when you think back to James Brown’s day. That guy would release so many albums in a year his record company could barely keep up with him. Ah, but the music industry is not the same. Anyway, Unwound’s final album came out three years after its predecessor, which was not only uncharacteristic but weirdly ominous. You just knew it was going to be the band’s last. It was a double album. It was ambitious. It veered off course from the trio’s signature maelstrom of energetic mania, and I didn’t like it at first. Unwound was at its best for me when it could crawl into tiny blissful pockets of tuneful serenity and then explode into splintering shards of distortion, angst and melody. It was the way in which this band controlled its chaos that made it special. They weren’t the best singers or players or even songwriters. But the energy that the three of them could create in a room was unlike almost anything I’d ever seen. And I was the right age at the right time to experience it. I’ve grown to appreciate Leaves Turn Inside You over the years, but I don’t think of it as an Unwound album, even though some consider it to be the band at its pinnacle. It was more of a celebration of the band’s previous work with an awkward attempt at maturation that I’m still not sure quite suited. Bands have to grow musically, otherwise, what’s the point, right? It’s easy to write off several early Unwound records as being “samey,” which is why Leaves Turn Inside You seemed so momentous by comparison. I think people got caught up in that mentality and the zeitgeist grew from there. Don’t get me wrong: I love Leaves Turn Inside You. I think it’s a great record. It’s the record the band had to make in order to continue, but it’s not Unwound’s best album. It’s the best Unwound album for people who don’t love Unwound. Still, the release of this double live LP over ten years after the band’s demise is exciting. I miss the band so much I’d take anything at this point. But just as Leaves Turn Inside You is not Unwound’s best album, this tour was not Unwound’s finest hour in concert. I saw Unwound for the last time six days after 9/11 at the 40 Watt in Athens, Georgia. It was an eerie time. The show felt weird for so many reasons. Five musicians played these more complicated songs, as opposed to the core three. The energy I had felt so many times before was missing. It felt forced and flat and almost anachronistic. I knew at that show that I’d never see Unwound play again. It was over. And, sure enough, a few months later the announcement came. I haven’t heard this live album yet. I pre-ordered it today, but I’m hesitant to listen, despite it being one of my favorite bands of all time captured live for the last time. [via KRS]

END_OF_DOCUMENT_TOKEN_TO_BE_REPLACED

Siouxsie & the Banshees’ entire set at Satory Saal, Cologne, Germany from June of 1981 is available on YouTube via German TV show “Rockpalast.” This performance took place merely weeks after the release of its fourth LP, Juju. I saw the band from the second row just under ten years later. It was, perhaps, the most starstruck I’ve ever been, which may speak to the lack of celebrities with whom I’ve been in close proximity, but it was exciting nonetheless. The video quality is slightly grainy here, but it’s a crazy good set, which Slicing Up Eyeballs has conveniently available for us:

Foals seem to be kicking it back into gear with a flurry of news lately. The band performed a new song on “Later… With Jools Holland” last night. The new record is shaping up to be slightly more upbeat and, dare I say, funkier, than Total Life Forever‘s somber comedown. Holy Fire will be released in February 2013.

It’s strange to think of this style of adrenalized modern rock as “retro,” but I can’t think of too many bands that sound like this anymore. If radio were still a thing that influenced people’s record buying habits, this song might sway a few ears. Oh, and, of course, if people still bought records … I love this band, but maybe that’s because I’m nostalgic for this style. Or maybe it’s just because this band is good.

Sub Pop co-founder Bruce Pavitt has released an ebook of never-before-seen Nirvana photos from the band’s notorious European tour in 1989. Experiencing Nirvana: Grunge in Europe, 1989 is available now via Apple’s iBookstore. It should be noted that this is the Chad Channing era, otherwise known as pre-Dave Grohl. Warning: Sad Kurt photos follow. [via Pitchfork] 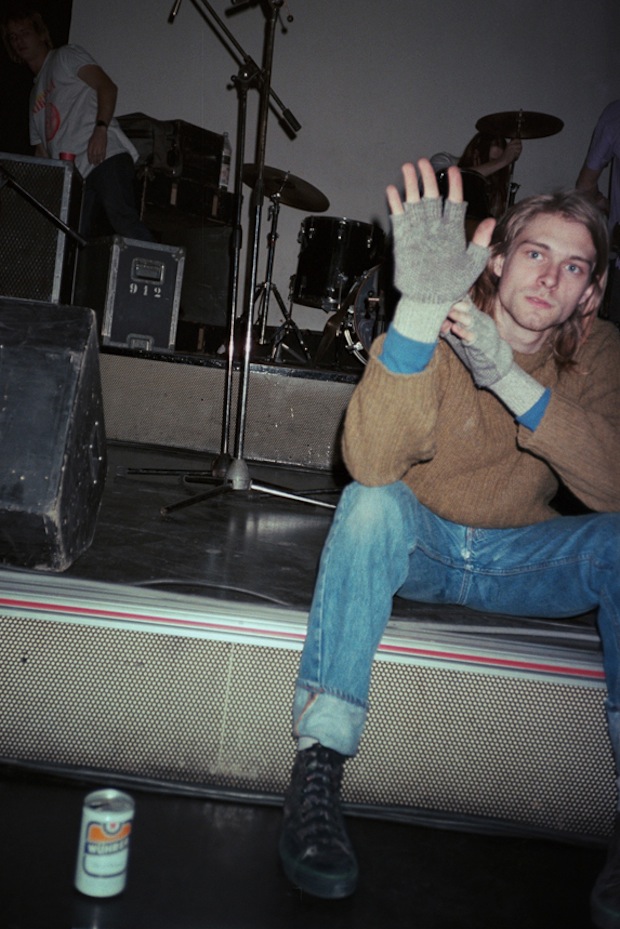 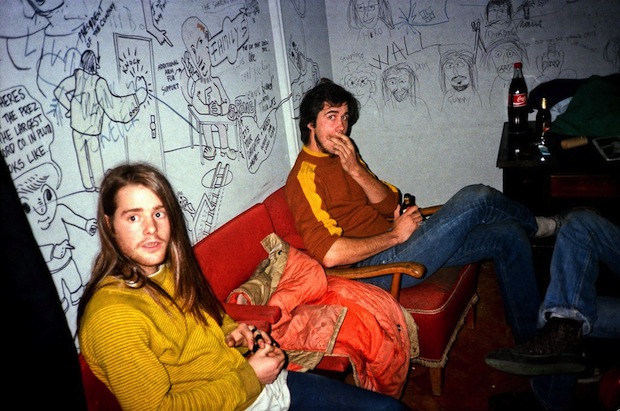 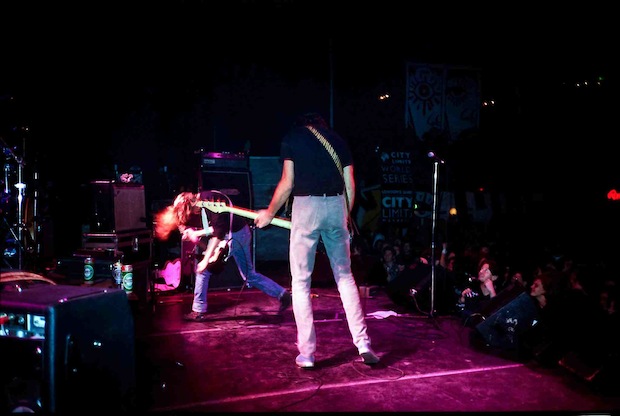 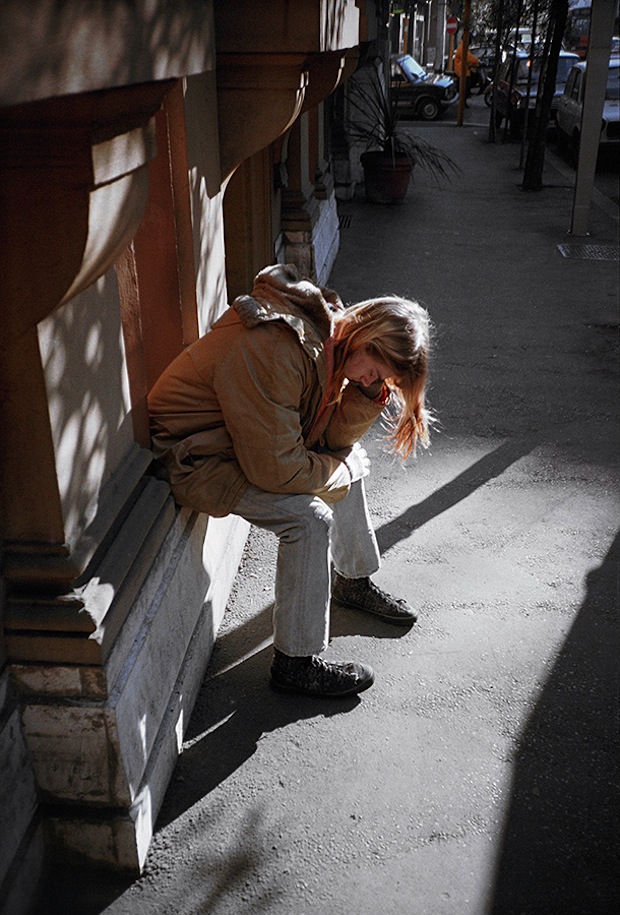 I hate seeing anything Christmas related until after Thanksgiving. The neighbors who put up Christmas decorations prior to that day are gauche, tactless people. And here comes Sufjan with his guaranteed-to-make-you-cry interpretation of “I’ll be Home for Christmas” way before Christmas should even enter our consciousness. And this version is depressing as hell, so how’s that going to get you in the spirit? This disturbing video certainly won’t help matters. But the man does have a new Christmas album to hawk, so he’s prepping early. Commerce comes first.

Seems like every few years …And You Will Know Us By The Trail Of Dead releases a new album and everyone goes, “man, this is their best since Source Tags & Codes.” Ok, that didn’t happen when So Divided came out. But you know what I’m talking about. Worlds Apart is the only outright stinker in the cannon and even that record isn’t horrible- just a touch heavy on the prog and pomp and a little light on the punk. But even getting down to the nitty gritty, the band’s past two albums have been pretty stellar. And the new one, Lost Songs, is in heavy rotation.